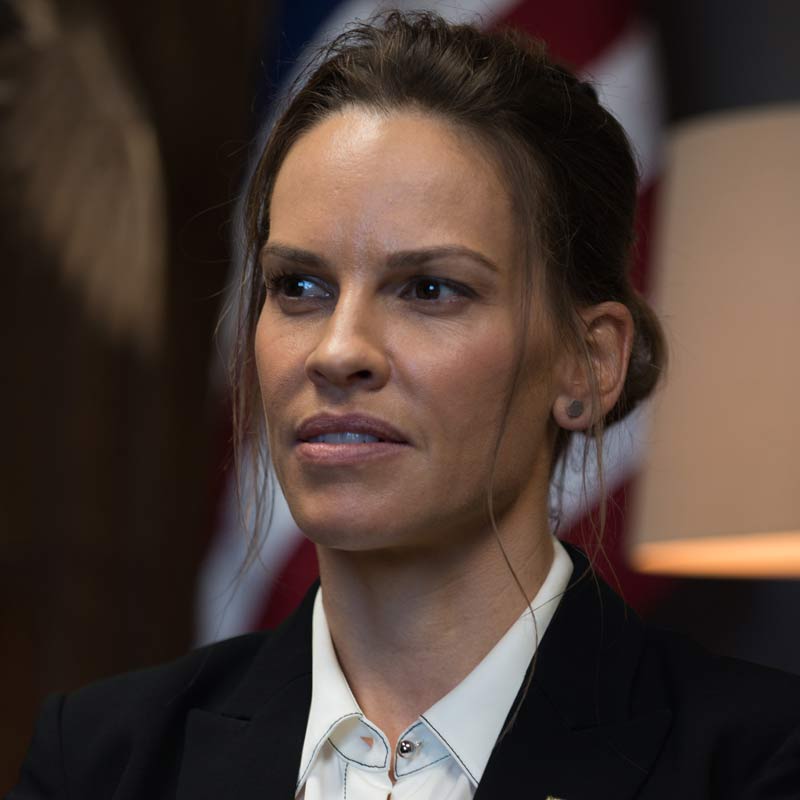 With a career spanning more than 20 years as one of Hollywood’s most dynamic and nuanced voices, Hilary Swank is the epitome of what it means to be a consummate professional as an actress and producer. Swank has worked with such leading filmmakers as Clint Eastwood, Christopher Nolan, Mira Nair, Richard LaGravenese, Garry Marshall, Philip Noyce, Brian De Palma, and Sam Raimi. Swank’s most recent films include "You’re Not You," in which she starred as well as produced through her 2S Films banner, and "The Homesman," which she co-starred opposite Tommy Lee Jones, who also served as director.

This year, Swank can be seen in the 3D animated film Spark, directed by Aaron Woodley for Toonbox Entertainment. She voices the role of The Queen in the sci-fi, space odyssey. The cast also includes Susan Sarandon and Jessica Biel. The movie was released nationwide on April 14th.  Swank will also co-star in HBO’s latest series, The One Percent, created by Alejandro González Iñárritu, along-side Ed Harris. The series will follow a dysfunctional family struggling to keep their farm from financial ruin.

In 2017, Swank will appear in Steven Soderbergh’s latest film, Logan Lucky, which will co-star Riley Keough, Adam Driver and Channing Tatum. Hilary will also appear in the Billie August film, 55 Steps alongside Helena Bonham Carter and Jeffery Tambor. The film is based on the true story of Eleanor Riese (Helena Bonham Carter) who filed a class action suit to give competent mental patients the right to have an input on their medication. Swank will portray ‘Colette Hughes,’ the lawyer that was appointed to her case.

In 2016, Swank added clothing designer to her resume with her clothing line Mission Statement. In a world where women are often objectified and trivialized, Swank focused on creating clothes that merge high-performance and high-fashion to allow the wearer to find the perfect balance of movement while they are working out, in the office, resting or playing.

Swank’s breakout role as Brandon Teena in the 1999 drama Boy’s Don’t Cry earned her an Oscar® for Best Actress.  Her much lauded performance also earned her a Golden Globe Award and Critics’ Choice Award, as well as New York Film Critics, Los Angeles Film Critics, Chicago Film Critics, and National Society of Film Critics Awards in the same category.  Additionally, the National Board of Review recognized Swank’s work with the Breakthrough Performance of the Year Award, and she earned BAFTA and Screen Actors Guild (SAG) Award® nominations. In 2005, Swank won her second Academy Award® for her starring role in Clint Eastwood’s Oscar®-winning Best Picture Million Dollar Baby.  In addition, she won her second Golden Globe Award and a SAG Award®, as well as the National Society of Film Critics and Critics’ Choice Awards for Best Actress.  That same year, she also earned Golden Globe and SAG Award® nominations for her role in HBO’s “Iron Jawed Angels.” Other credits include starring in and executive producing the fact-based drama Conviction, which Swank received a SAG Award® nomination; starring in and executive producing Mira Nair’s Amelia, the story of the legendary aviatrix; and Freedom Writers, directed by Richard LaGravenese. Additional credits include LaGravenese’s P.S. I Love You, Brian De Palma’s The Black Dahlia, The Affair of the Necklace, Sam Raimi’s The Gift, Stephen Hopkins’ thriller The Reaping, Christopher Nolan’s Insomnia, and Garry Marshall’s New Year’s Eve, as well as producing the romantic comedy Something Borrowed, the first film produced under the banner of her production company, 2S Films, formed in partnership with Molly Mickler Smith.

Swank’s additional efforts focus on her commitment to animal welfare and rescue.  In 2009, Swank participated in the IAMS Home for the Holidays campaign dedicated to placing homeless pets.  During the campaign, more than 1.4 million animals found forever homes.  She's also been involved with Best Friend's Animal Society for more than a decade and is an Ambassador for this organization which works tirelessly on behalf of animals through adoption, spay/neuter programs and education programs for "pet parents."  On Thanksgiving Day, 2014 and 2015, Swank Executive Produced and Co-Hosted a groundbreaking primetime 2 hour special on FOX aimed at dog rescue titled FOX’S CAUSE FOR PAUSE: An All-Star Dog Spectacular.  During the event, more than 60 dogs were rescued and tens of thousands of dollars raised to help local, grass roots charities.

Swank continues her dedication and commitment to animal welfare through the launch of her charity, The Hilaroo Foundation, which will bring youth, who have been given up on, and animals, who have been abandoned, together to help heal one another through Rescue, Rehabilitation, and Responsibility Training.